I made this risotto while we were anchored in Darwin Harbour awaiting our visa and paperwork to set sail for Indonesia. The crayfish was caught on our way to Darwin as we cruised the Great Barrier Reef.

I have never made a risotto before, so I googled to get some ideas. In the end I combined some of my favourite flavours to make the risotto I had envisioned. Yay!

This is what I did… I melted butter in a large pan and sautéed finely chopped onion and garlic, diced chorizo and sliced chilli until the onion had softened. 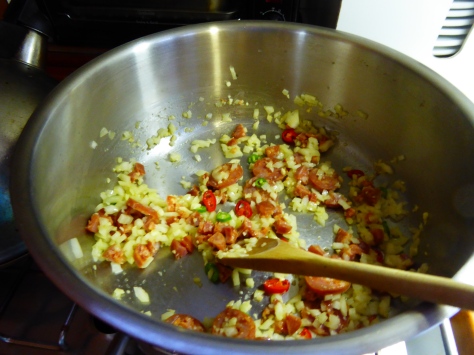 Next I added the rice and cooked it for approximately four minutes “toasting it”. This step apparently determines the final texture of the risotto. It heats the outside of the rice quickly thus preventing it from breaking and seals in the starch.

I then added a cup of white wine. On medium heat I cooked it until all the liqud was nearly absorbed. I then began the task of adding 1/4 of a cup of hot fish stock at a time, waiting for each to be absorbed before adding more, all the while stirring. When the rice was nearly done (a taste test will tell you) I added sliced mushroom, heaps of tarragon and the lobster.

One thought on “Spicy Crayfish Risotto”

Road trip on our trusty scooter to Krabi from Phuket.

Join 13,502 other subscribers
Follow Gourmet from the galley! on WordPress.com