We love smoked fish and had the desire to make some. We were anchored at Langkawi, and we had a couple of problems to overcome before we could make our own smoked fish. The first was we didn’t have a smoker and the second is we could not find any hickory wood chips (or similar) on the island.

Not usually one to be deterred from doing something just because it is not straightforward, Dwayne set about thinking about how to make an easy smoker. He came up with something we could use on the beach with two aluminium foil trays, some bulldog clips and a rack.

In the meantime, I had decided we could use a tea mixture instead of wood chips as the smoking mix and set about making something that may just add a delicious flavour to our fish.

This is what we came up with…

For the tea smoke mixture…

And this is how we smoked our fish…

I made the brine by dissolving the salt and sugar into 1/2 a cup of boiling water. Then I add 1/2 a cup of ice cold water. I then let the brine cool down before I added the fish.

I let the fish soak in the brine for 1/2 hour, then removed it and dried it with paper towels. Then set it in the fridge until we were ready to smoke it.

For the tea smoking mixture, I crushed up the cinnamon stick, star anise and cloves in my mortar and mixed it with the tea, sugar and rice.

When we were organised we went to the beach to set up our smoker.

Once on shore, we placed some of the tea mixture on the bottom of one of the trays then, because my rack doesn’t have legs, we used some old rocks from the beach and placed the rack on those so it was sitting over the tea mix. Next, we placed the fish on the trivet and topped with the other tray. Using the bulldog clips we secured the two trays together. The ‘smoker’ was then placed on top of a couple of bricks allowing space for the burner underneath.

Now we needed a flame. Dwayne, always willing to do one for the team, then skulled a can of beer, proudly producing the much-needed burner equipment. He cut the beer can in half and filled it with dry sand and then poured the white spirits over the sand. He lit this mix-up and placed it under the tray…. we now had our smoker and we could sit back with a refreshing glass of white wine while we let the smoker do its job.

(Alternatively, you can use coals as your heat source or even a wood fire.)

We smoked the fish for about an hour. The cooking time will obviously depend on how hot you have it cooking.

We were extremely happy with the result! Next time I’ll tell you how to make my yummy smoked fish chowder! 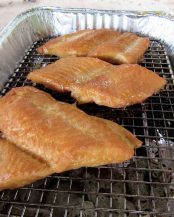 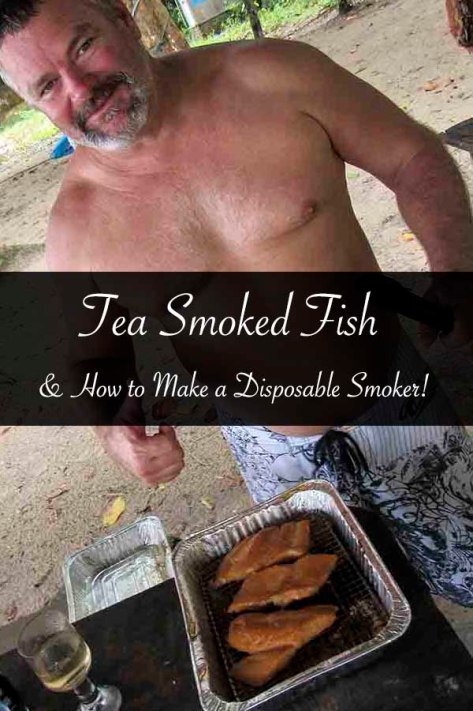 Road trip on our trusty scooter to Krabi from Phuket.

Join 13,502 other followers
Follow Gourmet from the galley! on WordPress.com