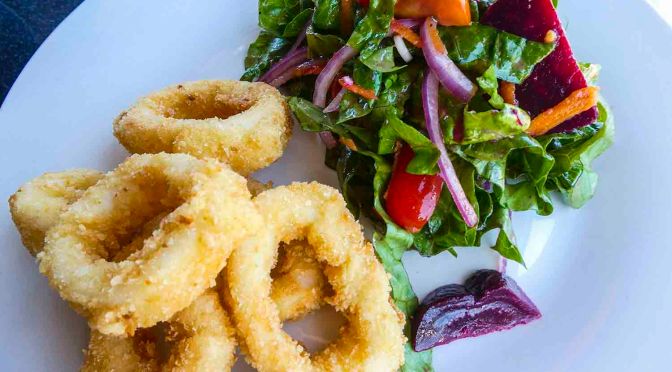 Camping by the beach was bringing back unforgettable memories from our time in 2004 travelling around Australia. Back then, we were towing a fishing boat and living in a tent. Now we were towing, and living, in a camper trailer and we had a kayak to fish from. We were camped at The Gap on the Yorke Peninsula in South Australia.

Our very first attempted of fishing from a kayak was a little daunting – for me at least. The water was cold, and I did not relish falling in. There was a little wind, and the water was choppy, and I worried about the balance of the kayak. Probably not the best time for our maiden voyage especially as we had a couple of fishing rods, a crab net and a squid jig on a reel.

We put the net in and then attempted some fishing. After a while, with no luck, we decided we’d better check the crab net. As there was a bit of current, and chop we had to paddle against to keep balance, we had drifted quite some distance from the net. The float, a plastic water bottle, was not very visible. In fact, I am super surprised we even found it. We did, and all we caught was a rock crab. After returning the little crab back to his watery home, we put the squid jig in and soon Dwayne had a hit. Unfortunately, the squid got away. He had three more squid escape before he bagged one. Now a happy little fisherman, he said we could paddle for shore.

Back on shore, Dwayne cleaned the squid and then got the campfire lit and heated the oil. In the meantime, I crumbed the squid rings and made a salad.

We were camped at The Gap, on the Yorke Peninsula in South Australia. Read about our stay at The Gap it here.

Lightly coat a squid ring with the flour. Then dip the squid in egg and then coat well in crumbs. Set it on a plate and repeat with the rest of the squid.

While I crumbed the squid, Dwayne heated the oil over the fire. Once the oil was hot enough (check by testing a small piece of squid), Dwayne fried the squid in three batches.

Season with salt and pepper and serve with a tasty salad and a zesty dressing.

Memories from our time in Croatia. #mljet